You might wonder why I wanted to attempt nearly 700 pages of essays written over two centuries ago. The simple answer is that the Federalist Papers are largely a bunch of essays defending and explaining the reasoning behind one of the greatest documents in the history of the world–the Constitution of the United States of America. And I thought it might be instructive to understand some of the reasoning behind this great document which preserves our God given rights.

Admittedly, some of this makes for very dry reading and some of the conclusions the authors (Alexander Hamilton, John Jay, James Madison) make seem rather self evident, but really this is because the United States, for the last two hundred years, has experimented with the very principles they were expounding on, and so they are ingrained into our very society.

At the time they wrote these essays, the ideas they were espousing were quite literally revolutionary thought.

The first sections of the Federalist Papers deal largely with enumerating the reasons why a joint union is preferable to a bunch of separate countries side by side on the North American continent. As the essays continue, proving their point with many well-reasoned facts, the authors float the idea that though they feel a strong navy will be necessary for the defense of the United States that a standing army will not be necessary and that in fact a standing army should be considered a danger to the liberties and freedoms of the citizens.

Further, a great amount of effort is spent in enumerating the checks and balances to ensure that though the Federal government has the necessary power it needs to ensure the safety and freedoms of its citizens that it is not so powerful as to usurp the freedoms of the people. Some of this is accomplished by dividing the power between the three governmental branches: Executive, Judicial, and Legislative and by not allowing a standing army.

These explanations are rather enlightening when explaining the terminology of the second amendment of the US Constitution which states, “A well regulated Militia, being necessary to the security of a free State, the right of the people to keep and bear Arms, shall not be infringed.”

At that particular time Hamilton, Jay, and Madison doubtless could not envision a future where the facility of modern transportation would shave an Atlantic crossing from three or four weeks to a matter of hours and so a standing army seemed superfluous to a strong navy.

The modern era has proven that the lack of a standing and ready military could prove disastrous, especially when enemy forces are capable of setting foot on far continents within hours of receiving the orders.

Some might argue that since the United States has a standing army it does not need a militia and this therefore invalidates the second amendment right for the citizenry to bear arms.

On the contrary, given the great concern expressed in the Federalist Paper over the dangers of standing armies being used in a tyrannical fashion to squelch the freedoms of the individual, it is evident that the right to bear arms would still certainly be considered of paramount importance by the framer’s of the Constitution.

One of the necessary counterbalances to tyrannical power is weaponry in the hands of the citizenry. No one in their proper mind would imagine that an unarmed man is on equal footing with an armed marauder. The second amendment is one of the guarantors that freedoms will not wholesale be stripped away by an overreaching and tyrannical executive, judicial, or legislative branch. 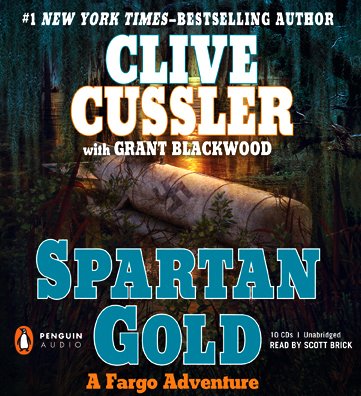 It’s highly possible that this book was more an effort by collaborator Grant Blackwood than Clive Cussler but, by design, its very much written in the vein and style that Cussler made famous with his Dirk Pitt books.

This is the first of a series of books featuring husband and wife treasure hunters Sam and Remi Fargo. Though I certainly enjoyed the book, there were times when I felt that Sam Fargo might have been interchangeable with Dire Pitt (if he were the marrying sort).

There were a number of lines where I thought the author could have swapped Sam’s name for Dirk Pitt’s name, because the quips coming out of Sam’s mouth sounded very much like what Pitt would say.

Perhaps, to be so adventurous one must be cut out of a very similar mold and might speak similarly. However, to differentiate Sam from Pitt the author does play up the aspect of Sam Fargo being an engineer and he uses this know-how to engineer a trap and an escape or two. This does help draw a distinction between the two characters, along with Sam being in a monogamous marital relationship.

When I first read one of Cussler’s other non-Dirk-Pitt series, featuring Kurt Austin (again cut from a similar mold to Dirk Pitt), I wasn’t completely sold. However, Kurt Austin gradually grew on me and I found I enjoyed those books just as much as the Pitt books.

The Kurt Austin books often feature the recurring characters of another husband and wife team: Marine Biologist Gamay Trout and her husband, the bow-tie wearing Paul Trout. At the moment, Paul and Gamay still stand as my favorite Cussler-related  husband and wife team–but I will be checking out the further adventures of Sam and Remi.

P.S. In an honored pulp tradition, Sam and Remi Fargo are fabulously rich–which greatly facilitates their ability to jet around the world searching for lost treasures. However, I somehow managed to miss how they had gained their wealth. Perhaps it was an inheritance, a brilliant invention or just the fact they are so good at finding ancient treasures. If anybody knows, please comment below!

Aside from its obvious connection to Lovecraftion Mythos (the heroine of the tale, Elisa Hill, hunts down the mythical Necronomicon) this book also presents some tidbits for those who enjoy cross-over universes.

Around page 20 Elisa Hill requests Demerara rum from a stewardess because the situation she finds herself in is similar to the situation that an associate of hers might find himself in, and Demerara is a favorite drink of his. Though not specified, those familiar with Dillon as written by author Derrick Ferguson, will know that Demerara is his preferred drink.

Famously, Robert E. Howard (creator of Conan, King Kull, and Solomon Kane) and H.P. Lovecraft (who created a whole genre of fiction which has been dubbed the Cthulhu Mythos) corresponded with each other, and referenced elements of each other’s works in their stories. For this reason, a collection of REH stories that incorporate elements of the Cthulhu Mythos is a particularly interesting idea, each introduced by a well-researched preface by Robert M. Price, who also edits the volume.

Being rather widely read in Robert E Howard’s fiction, and a huge fan of his fiction and student of his muscular prose, I was familiar with most of these tales—but they’d lost none of their power since their previous readings. There were a couple of tales I was unfamiliar with, and a quartet of stories which were completed posthumously from fragments of tales Robert E. Howard began but never completed.

In terms of quality these posthumous collaborations are where the collection is uneven. Writing like Robert E. Howard and bringing a fragment to a satisfying completion is a difficult thing and, indeed, REH himself may have doubted his own ability to bring some of these fragments to a successful conclusion and therefore abandoned them.

Some of these fragments are very brief and hardly offer much direction to the author following in Howard’s footsteps, and it is glaringly obvious when the story loses its impetus. The one posthumously completed story that I thought was brought to a satisfying end was The House in the Oaks with collaborator August Derleth, as I scarcely noticed the changeover.

The other potential problem with this collection is noted in the preface to the book: The stories herein are complete and unexpurgated. Some contain racist stereotypes and references. Readers can judge for themselves.

This is particularly noticeable in Skull-Face which is REH’s version of Sax Rohmer’s Fu Manchu. Rohmer’s tales are couched in terms of the ‘yellow’ nation of China rising up to destroy the entire ‘white’ race. Howard ups the ante by having the ‘black’ and the ‘yellow’ nations combining their forces under the ancient and abominable Skull-Face to destroy the ‘white’ race. These attitudes reflect some of the fears of the times and often, and unfortunately, opposing ideology was equated with skin color.

In the case of Skull-Face, the opposing ideology is not something like Communism or Imperialism, but rather a religion springing up around the aforementioned Skull-Face who is also known as Kathulos which, Price points out, Lovecraft later incorporated into his mythos. The idea of a cult which wants to exterminate all opposing ideologies is not so far-fetched as it may seem at first glance, considering a large population of Muslims cling to the extremist belief of doing just that.

Also, I’d like to call attention to the cool border and chapter header art by Dave Carson, which adds a macabre element to the great layout, and adds to the ambiance of this volume.